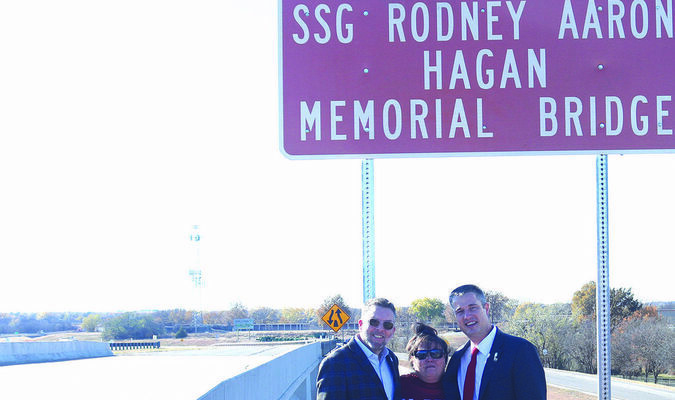 The memory of Staff Sgt. Rodney Hagan will live on not only in the hearts of those he touched but those who cross over Highway 81 on Highway 7 just south of Bois D'Arc in Duncan.

Friends, family members and state legislators Rep. Marcus McEntire and Sen. Chris Kidd met atop the hill of the overpass to honor the memory of the Comanche High School Class of 2005 graduate on Nov. 29. He died in 2019 in Texas. He served 15 months in Iraq with the U.S. Army and a year in Korea during his time in service.

Tears were shed of those in attendance as his mother, Angie McBride, and his father, Don Hagan, cut the ropes off the black plastic draped over the sign to reveal the name of their son.

It was a day of mixed emotions for McBride as she spoke after the unveiling.

"My emotions are sad still, but very happy to know that he has been honored in the area that he grew up in the state of Oklahoma and that he will be remembered by so many people," McBride said. "I have passed many, many memorial sites on the road and I always now take the time to think about that family, their friends, their loved ones and know that name means something even if it only goes through my brain for a second of reading, it is honored."

It was a culmination of more than a year of work to get the bridge named after Hagan.

"I started the paperwork in March of 2021 and they responded by saying that (the naming of bridges) had already been done in February so it would be the following year," McBride said. "I finally got the approval on it in October and then it was finalized in November."

Some took the time to address the crowd about their memories of Rodney.

"There's not a day that goes by that we don't think about him," said Don Hagan.

Morgan Powers grew up with Rodney Hagan and considered him a brother more than a friend.

"It's an awesome day for him to be remembered," Powers said. "It's great to remember what he and others did to represent us and the sacrifices they made. It's an emotional time."