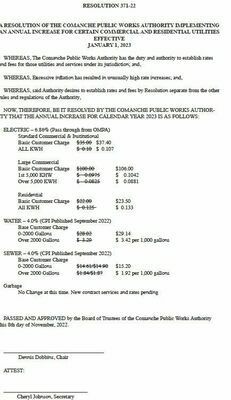 The new rates will begin in January and include a 6.86 percent increase on kilowatt hours.

“There are other cities (in the Oklahoma Municipal Power Authority) that are raising their rates more than that,” said Chuck Ralls, city manager. “This increase is on the lower end of (what other cities will be charging).”

“The impact on customers will be minimal,” Ralls said.

In other business, trustees agreed to the purchase of a new bucket truck for the electric department.

“Bucket trucks are a checkbook for the city,” Ralls said. “We need them to keep the power up and going.”

The trustees agreed to a $168,368 bid and while payments could be made through the seller, Ralls said American Nation Bank was offering a better rate and a better payment period to go through them. The trustees voted to go with the bank offer.

The PWA also agreed to accept the new health insurance offer. It includes a nine percent cost increase. Ralls said they looked at different ways of trying to tweak the plan, but nothing had a major impact so they decided to keep everything the same.

In the final business of the meeting, the trustees approved a one-time salary adjustment for employees. A total of $10,495 will be distributed among the city’s 39 employees.

In the city council portion of the meeting, Ralls informed the council that he had a great meeting with the Oklahoma Department of Transportation (ODOT) about the downtown sidewalks.

“ODOT is taking full responsibility for the sidewalks,” Ralls said.

There has been downtown flooding during heavy rains because of drainage issues. Ralls said ODOT agreed the contractor did not build the sidewalks correctly in places and they will be redoing the work on them.

“There is no time frame for when the work will start, probably sometime after the first of the year,” Ralls said.

In other business, the council agreed to reimburse volunteer firefighters $6,000 for personal expenses incurred in 2022 to be paid from the Rural Fire Fund.