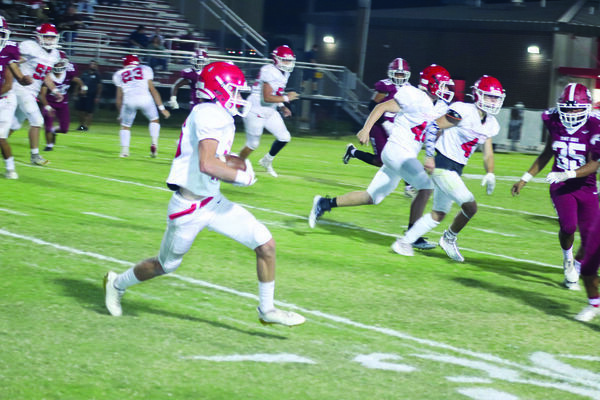 The Comanche Indians snapped a three-game losing streak and picked up their first district win of the season with a 42-34 win at Crooked Oak in Oklahoma City last Friday.

Senior Braylen Butler led the way for Comanche offensively with 219 yards on the ground and two long back-to-back touchdown runs and accounted for nearly half of the Indians’ total offense.

After a slow start to the game where the Indians went three-and-out and then saw the home team march down the field for the first score of the game.

The game would belong to Comanche (2-3 overall, 1-1 District 2A-3) from that point on until Crooked Oak (1-3, 0-2) made it interesting late in the contest but failed to catch the Indians.

On the Indians’ second possession of the game, quarterback Kooper Doucet connected with Noah Presgrove for a 56 yard score. It would be the first of two long touchdown pass connections the seniors would end the night with.

The Indians would take control on their next possession following a Crooked Oak punt. On the first play from scrimmage, Butler zoomed through the defense on his way for a 69-yard touchdown run. Presgrove’s point after made the score, 14-6 with 1:40 left in the opening quarter.

After holding the Ruf-Nex on fourth down on their next possession, Butler again found pay dirt on the first play of the drive, this time scampering for 72 yards right up the middle for his second straight touchdown.

Comanche would extend its lead again on its next possession. This time Doucet capped off a seven-play 90-yard drive with a seven-yard run. The drive included a 22-yard pass to Presgrove and a 35-yard pass to Corbin Bowen.

Crooked Oak came back to cut the lead to 28-12 with just 1:28 left in the half, but Comanche was not quite done yet. For the third time in the game they would have a one-play drive when Doucet connected with Presgrove again as he outfought the defender for the ball and ran the rest of the way for a 46-yard score. It would give the Indians a 35-12 halftime lead.

In the second half, Comanche pushed its lead to as high as 42-20 when Doucet scored from two yards out with less than a minute left in the third quarter.

Comanche kept up the pressure, trying to score once more to get the maximum district points, but turned the ball over late in the game on downs, giving the Ruf-Nex the ball for the final minute of the game. The Comanche defense held, however, and the Indians would take the win.

Comanche finished with 443 yards of total offense with Crooked Oak finishing with 407.

Presgrove led Comanche in receiving with four catches for 124 yards and two scores. Bowen had five catches for 71 yards.

Doucet finished the game 11-of-18 for 211 yards passing with two scores and two interceptions.

The Indians will host Community Christian (2-3, 1-1) this week at 7 p.m. in a key game for the Indians for playoff positioning.

Comanche will have to contend with defensive end Bai Jobe, a Michigan State commit, who Comanche basketball fans may remember from the times the Indians played the Royals. Community Christian lost to Washington last week, 42-7.

Comanche wrestlers ready to make their mark at ...