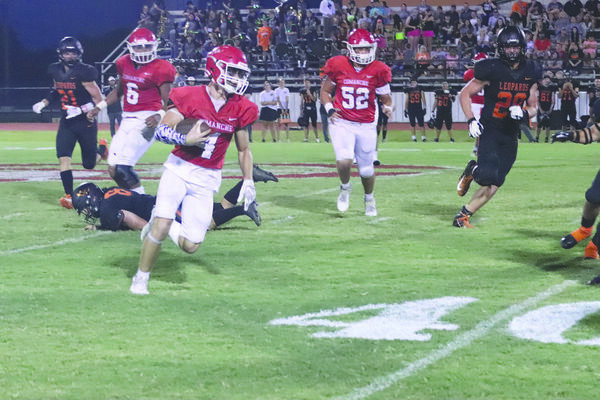 The Lindsay Leopards came to Comanche and spoiled the Indians’ homecoming last Friday, shutting out the Indians, 68-0, in the district opener for both teams.

Lindsay scored on every offensive possession except one as the Leopards jumped out early and kept rolling.

Comanche got inside the Lindsay 10-yard line twice in the game. The first ended on an interception and the second ended with time running out in the first half.

The Leopards scored nine touchdowns, six on the ground and three by passing and converted eight of nine two-point tries after touchdown.

Lindsay led 20-0 at the end of the first quarter and 44-0 at the half. They would add two more scores in the third and one more in the fourth.

Comanche’s longest drive of the night started on its own 37 and went 10 plays. The Indians got a 22-yard run by Gabe Diaz and a 13-yard run by Braylen Butler in the drive. Comanche eventually found itself with a first-and-goal at the Lindsay 7, but the Indians could only muster one yard in the first three attempts. On fourth down, Diaz’s pass was intercepted in the end zone by a leaping Bentley Kesler with 5:32 left in the second quarter.

Later in the half, Comanche quarterback Kooper Doucet connected with Corbin Bowen for 38 yards that got the Indians down to the Lindsay 17. Two plays later with a third-and-3 from the 10, Comanche, out of timeouts, was unable to get the snap off and the half ended.

Diaz led Comanche in the game with 36 yards on 15 carries. Doucet had 18 yards on eight carries.

Comanche had three completions for 43 yards and Lindsay had five catches for 115 yards.

The Indians (1-3 overall, 0-1 district) get back on the road this week when they travel to Crooked Oak in Norman for the second district game.

Crooked Oak is 1-2 overall and 0-1 in district play. The Ruf-Nex fell to Purcell, 58-7, last week, in their first district game.

Comanche wrestlers ready to make their mark at ...