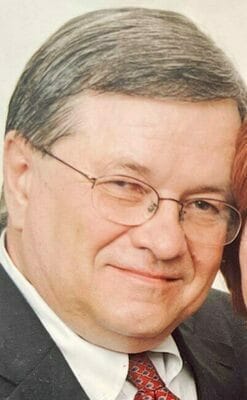 Jesse W. Beck, Jr was born on March 30, 1945, in Dalhart, Texas to Jesse W. Beck, Sr. and Catherine Mary Beck, née Priess. Jesse showed his determination and grit as a newborn as the doctor informed his parents that he wouldn’t survive through the night and they shouldn’t get attached to him, but he did survive, and his life has been a testament to the fighting spirit he held within. Jesse has an older brother, Robert “Bob.”

The Becks moved to Comanche and this is where Jesse met his future wife, Cecelia, in first grade, where they were both named king and queen of the class. It was a lifelong love and devotion they would have for one another and they were married for 57 years.

After graduating from Comanche High School in 1963, Jesse matriculated to Oklahoma Military Academy (OMA) in Claremore on a football scholarship and during his sophomore year married Cecelia. He then attended the University of Oklahoma and majored in political science with a minor in History. He then was accepted into the law school there and thrived making the law review and graduating in 1971.

He accepted a job with McKnight & Gasaway in Enid and practiced law there for over 30 years. He was highly involved in the community as he was active in the First United Methodist Church, President of Rotary Club, Phillips University endeavors and the President of the Enid Chamber of Commerce. Jesse was also the unofficial tour guide of wherever he lived or wherever he visited, giving his friends and family hour-long car rides and tours of the cities and all of the history in them.

Jesse had a competitive side to him and was not easily intimidated. He also had a big heart and would go out of his way to help those in need. To say he was unique is an understatement. He will be missed and we will forever cherish his memories and take solace in knowing that he and his parents are watching over us.

We love you Jesse and you will be missed.

Fond memories and expressions of sympathy may be shared at Baggerley.com for the Beck family.