City agrees to chip in for Waurika Lake equipment 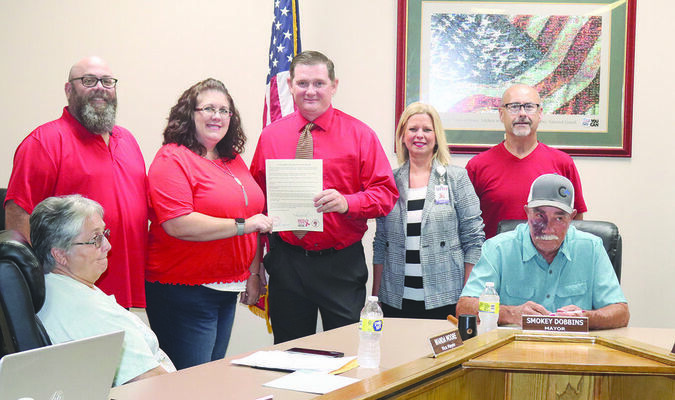 The Comanche Public Works Authority adopted a resolution to help upgrade the equipment in the Waurika Lake Master Conservancy District at its monthly meeting last week.

Dave Taylor with the lake district gave an update on what needed to be done at the lake and its aging equipment as it tries to keep up with water demands for several municipalities.

The public works authority authorized the city to match up to $75,000 towards funds for the upkeep at the conservancy.

In a related matter, the trustees appointed Shane Taylor as their representative to the conservancy district to replace Tommy Taylor.

During the city council portion of the meeting, the council finalized holding an election in April for Ward 3 and Ward 4 along with the currently vacated at-large seat. The election will take place April 4.

In another agenda item, the council passed an ordinance that would allow Comanche police officers to ticket people found with illegal drugs.

City manager Chuck Ralls said the city had found out that the county jail was releasing suspects if they did not have an amount large enough to charge with intent to distribute, so the ordinance would allow officers to ticket suspects with a small number of drugs rather than them taking suspects to the county jail.

In another police matter, the council authorized the police department to apply for a JAG grant. Assistant chief Cory Faulk said the department is in desperate need of new body cameras with eight currently out of service.

Faulk said the company they were using was bought out and they have had problems with the cameras ever since with software issues.
The council also did two proclamations for the month of October, one for Fire Prevention Week for Oct. 9-15 and one for Red Ribbon Week for Oct. 23-31.

In the final agenda item, the council voted to declare the trailer house at Comanche Lake as surplus and authorize the city manager to dispose of it through auction.

“The caretaker never used it,” Ralls said. “It’s more of a nuisance than anything right now.”