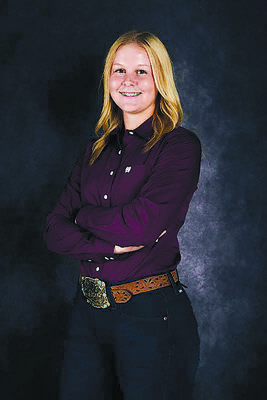 In an effort to build awareness of its show supply offering, NRS began selecting a team of the best 27 youth exhibitors. These exhibitors not only exhibit multiple species but travel around the country to the Nation’s greatest events.

In a press release, the NRS said that Comanche’s Caity Ramsey was among the best and brightest chosen to participate as a member of the 2022-2023 NRS Show Team.

Her participation and success in events such as the Oklahoma Youth Expo, The National Western, and the NAILE, accompanied by her ability to professionally represent herself and other brands made her an ideal candidate to represent NRS.

Caity said she looks forward to a successful year of showing and representing National Roper’s Supply both in and out of the show ring.

“The NRS Show Team was created to select an exclusive group of influencers within the livestock industry that would ‘show for the brand,’” Show Team Advisor, Tayler Sullivent said. “These exhibitors were hand selected because of their success and leadership roles within the show world. NRS partnered with companies such as Cinch, Twisted X, and Sure Champ to provide apparel, footwear, and scholarships to make this opportunity possible. National Roper’s Supply is thankful for each member of our show team and the opportunity to play a part in supporting young agriculturists.”

Stay up to date with Caity and the other show team members throughout the year by following the NRS social media pages on both Facebook (NRS World) and Instagram (@nrsworld).

The world’s largest retailer of team and calf roping ropes, NRS was built around supplying products to the rodeo and roping world, but in recent years has expanded its offering to include livestock show supplies for most species.

Their products range from equipment to products for daily care from both Weaver and Sullivan’s Supply. NRS also carries a wide range of show feeds and supplements from Purina, ADM, Biozyme and other top feed companies.