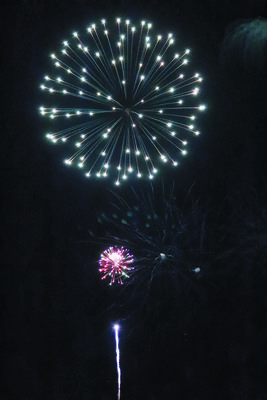 Comanche celebrated Independence Day with a fireworks show at Field of Dreams on Saturday night.

A crowd spread out across the Field of Dreams parking lot, the middle school and high school parking lots, the Village Mall parking lot and the empty lots between Dollar General and Comanche Ag building. The football stadium also had onlookers for the celebration.

“I felt the attendance was lower than prior years,” said Chuck Ralls, city manager. “Overall, it was a good show and a successful event.”

Twenty-two volunteer firemen spent approximately 30 hours from start-up to clean-up for the show.

The show would not have been possible the past two years without community support. In previous years, the city had footed the bill for the fireworks celebration. However, with the increase in cost of fireworks, the city council decided it would be in the city’s best financial interest not to have a show in 2021.

That got the attention of Trey Clinkenbeard of Delbert’s, who wanted to see the show continue in his hometown. He, his wife Jessica, along with Jeremy and Jennifer Bacon of Thirtsty’s spearheaded the effort to raise the money for the show. They were able to get the community involved and the money was raised to allow the show to go on.

This year, the city paid half of the cost and the rest of the $9,000 was raised through the Chamber of Commerce and the community.

A fireworks committee was formed with the Clinkenbeards as the chairmen, the Bacons as the vice chairman and Jeanne McGowen as the secretary.

The city set up a special account for people and businesses to donate toward the fireworks show throughout the year.

The history of the fireworks show dates back to the 1990s when then city councilman Johnny Brown of 3B Industries made the motion at a council meeting to have fireworks at the Field of Dreams. Brown always contributed to the finale and his family continued the tradition in his memory following his passing in 2020.

Those interested in contributing to the fireworks fund can make a tax-deductible donation at Delbert’s, Thirsty’s and City Hall. Donations can also be picked up by McGowen.

Next year’s plans include a possible downtown festival.

Bark in the Park this Saturday

City agrees to chip in for Waurika Lake equipment