King of the Stampede the Trail half-marathon 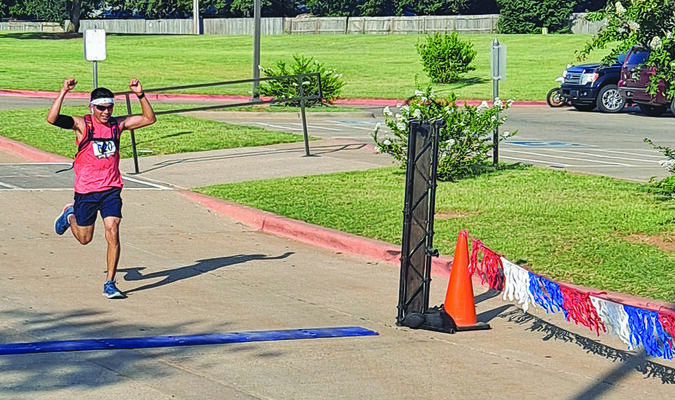 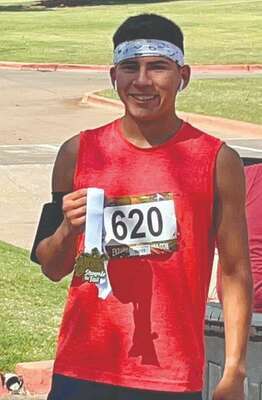 In 2019, Alex King’s parents, Josh and Bethany, were looking for a way to channel their then 14-year-old’s son energy.

“I was always outside, always running around,” Alex said.

His mother signed him up for a 5K race in Chickasha. Not only did he do well, but he also won the race. It would be the first of four first-place finishes out of the six 5K races he has run.

The 17-year-old from Meridian decided he wanted a bigger challenge and that challenge came in the half-marathon race at the Stampede on the Trail in Duncan hosted by the Simmons Center last Saturday. The result was the same as his initial 5K race, crossing the finish line in first place. His time was 1:41:48.

“I was really surprised,” King admitted. “My goal was two hours and I beat it by 19 minutes.”

As the race began, he was part of the front pack before they eventually started stretching out. He was not at the front then.

“I just started catching and passing people one by one,” King said.

Just after the halfway point of the 13.1-mile race, he thought he was in first place but it wasn’t confirmed until he made the turn at Empire Road at mile nine and asked a volunteer working the race if anyone else had come through yet. No, he was informed, he was the first.

“I thought, ‘This is incredible. I never thought I’d be able to do this,’” King said. “I like to push myself past limits, so that’s probably one reason I was able to do it.”

As a homeschool student, the teenager has had no formal coaching. It has all been self-discipline and the internet. He started specifically training for the half-marathon eight weeks prior to the race.

“My mom printed me out a schedule of someone who has run multiple marathons and half marathons,” King said. “I followed that chart every day of the week. I would run four days a week and then rest for three days. You start out at four miles, build up to 12 miles two weeks before the race and then start slowing down and running fewer miles.”

“I was nervous the entire time,” King said. “It’s mostly about pacing yourself the entire way and as you pass people, you’re thinking, ‘This is awesome.’ You think ‘I’m hoping for a certain goal,’ and when you get past that goal, it’s like one of the greatest feelings in the world.”

Lady Indians one win away from state tournament

McCasland elected as VP of OCEA