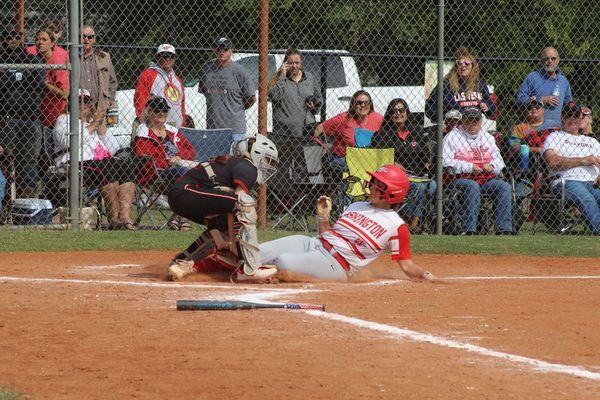 Comanche catcher Mykayla Slovak tags out a Washington base runner in the regional championship game on Friday.

Comanche’s softball season ended on the field at Washington in the regional final on Monday.

Thursday, Comanche opened the tournament with a 5-2 win over Perry before falling to Washington for the first time in the tournament, 7-0.

Friday, the Lady Indians defeated Lindsay in the elimination game, 5-1, before getting another shot at the host team. The Lady Warriors (34-4), though, would punch their ticket to next week’s state tournament with a 4-0 win.

“I told the team I was pleased with the way we played the past two days, especially against Washington, today,” said Aaron Minor, Comanche coach. “Washington is a good team. They will have a chance to win it. I think they will at least be in the championship game.”

In the final game, Comanche had the bases loaded in the first and second innings, but could not push across any runs. They did not seriously threaten from that point on.

“We played them 4-0,” Minor said. “We had our opportunities, we just missed them. I was pleased with today, and I think overall we had a pretty good year. We finished 19-9. It was unfortunate with the quarantine, but it was a pretty good year.”

“They have been a big part of the program for the past four years,” Minor said. “Over the years, several of them have contributed with a lot of experience under their belt and those will be a lot of holes to fill right there.”

In the final, Washington scored a run each in the first two innings to take an early 2-0 lead. The score remained that way until the bottom of the sixth when the Lady Warriors added two more to make the final, 4-0.

Comanche had seven hits in the game, led by Raylee Chaney and Brighton O’Connor who both went 2-for-4. Rendon, Mykayla Slovak and Gracee Miller had one hit each.

Rendon was the losing pitcher, giving up three earned runs on 10 hits. She walked none and struck out three.

In the first game of the day, Comanche broke open a 1-1 tie in the top of the fourth when Brown drove in Miller on a fielder’s choice.

The Lady Indians were then able to break open the game a little in the top of the fifth with three runs. O’Connor and Caity Blair had RBI in the inning.

Comanche had 10 hits in the game, led by O’Connor, Brown and Miller, who had two hits each. Raylee Chaney, Rendon, Blair and Slovak all had a hit.

Rendon was the winning pitcher. She gave up one earned run on three hits. She walked none and struck out five.

The Lady Indians scored three runs in the top of the second to break a 1-1 tie and would never trail again. The Maroon would cut the lead to 4-2 in the bottom of the third, but they would get no closer as the Lady Indians added a run in the sixth to make the final score, 5-2.

Raylee Chaney, Brighton O’Connor and Brooklyn Gill had two hits each to lead Comanche at the plate. O’Connor drove in two runs, while Gill and Mykayla Slovak drove in one each. Gill and O’Connor also each had doubles.

Kinley Rendon was the winning pitcher, giving up one earned run on 10 hits. She walked one and struck out two.

The Lady Warriors put up three runs in the first and third innings and it would be more than enough to advance to Friday’s championship game.

Comanche had six hits in the game led by Caity Blair and Gracee Miller, who had two hits each. Brighton O’Connor and Brooklyn Gill each had a hit.

Kinley Rendon was the losing pitcher. She gave up five earned runs on 12 hits. She walked one and struck out one.