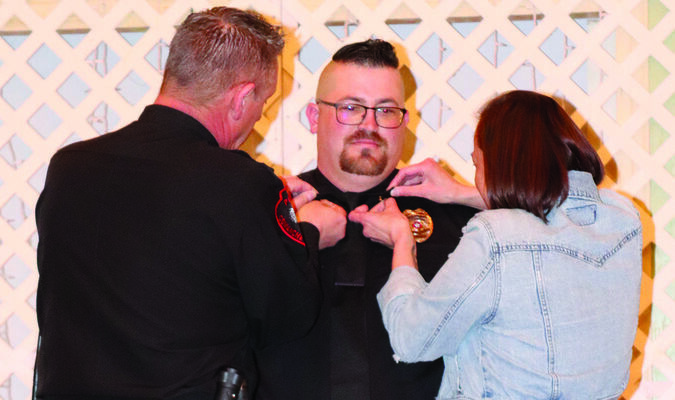 “I know it sounds like a cliché remark from the police but I believe you can draw more in with milk than vinegar,” Faulk, Comanche’s assistant police chief said.

It was that desire to help people that led to the path in law enforcement. Faulk was born in Duncan and spent several years in Fletcher before moving to Hope, Ark. for 14 years and then returning to Duncan. In 2004, he joined the Marines, where he was a machine gunner, and got out in 2010. In 2014, he became a Comanche police officer. He is also a firefighter with the Meridian Volunteer Fire Department.

“The idea (to become a police officer) hit me strong after I got out of the Marine Corps,” Faulk said. “I was missing the brotherhood lifestyle. I guess the need to protect others outweighs my own personal safety. I’ve never had a job that hasn’t been somewhat mildly dangerous to an extent, so it may be a little adrenaline seeking.”

Right or wrong some incidents over the past several years have put police officers in a spotlight and not in a good way. Faulk, 34, wants to do his part to show the good side.

“I would like to be the one guy that can change that. I usually see people on a bad day, whether it is an event that happened to them or making an event happen to them like a traffic stop, so we rarely make contact with people when they are happy,” Faulk said. “But (as a police officer), you just don’t take it personal. I don’t take anything personal. Mostly, I look to try to help people.”

But there are those good times that pop up every once in a while.

“It always makes you happy when a kid comes up to you and they’re like, ‘Hey, thank you very much, you made a difference in my life. Thanks for helping mom,’” Faulk said. “We’re not always out here looking people up to give them tickets and take them to jail. It’s just usually that is all people see. So yeah, it’s good and it’s bad. The rewarding sides are few and far between, but they are worth it.”

He also finds every day being different an enjoyable experience.

Another aspect many people might now see is the amount of training the officers go through.

“Lots of training goes into it,” Faulk said. “We do a lot of like social work meeting type trainings and meetings because we have to wear a lot of different hats. I mean, we are there for almost anything.”

He was promoted to assistant chief in a ceremony in February. It is a proud accomplishment.

“It was definitely a goal met,” Faulk said. “It was definitely something thrilling that made me feel accomplished. It’s one of those career goals that people go after and I was lucky to get it a little early.”

McCasland elected as VP of OCEA

Local man arrested for lewd acts to a child