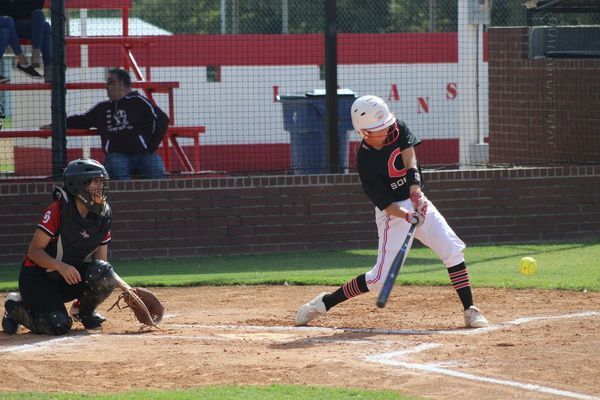 The Comanche Lady Indians had a couple of tough road losses last week that cost them a shot at winning the district and instead they ended up third. It still allowed them to host a bi-district tournament with Crooked Oak on Monday.

Comanche lost 2-1 to Dickson on Thursday and 6-3 to Kingston on Friday. They turned around and easily beat the Ruf-Nex by 12-0 and 14-1 scores on Monday.

“We’ll find out Thursday (at the Washington regional) how they will respond to those losses,” said Aaron Minor, head coach. “We had those two close losses and if we come up with a hit or so in each game, we probably win them, but we didn’t, so we’re in the position we are, and we’ll go do the best we can.”

The Lady Comets scored both of their runs in the first inning and then held on for the win.

Comanche’s lone run came in the top of the fifth inning with an RBI from Brooklyn Gill.

Comanche had six hits in the game to Dickson’s five.

Raylee Chaney and Kinley Rendon had two hits each. Brighton O’Connor and Gill had the other hits.

Kinley Rendon was the losing pitcher. She pitched six innings, gave up five hits and one earned run. She struck out seven and walked none.

After holding a 1-0 lead through 4 1/2 innings, Comanche saw Kingston score three runs in the fifth inning to take the lead and then added three more in the sixth to pull ahead.

Comanche took the lead in the top of the third with an RBI double by Brighton O’Connor that scored Raylee Chaney.

The Lady Indians tried to fight back in the top of the seventh. They scored two runs, but it would not be enough. Pinch runner Kenley Lemons scored on a wild pitch and Gracee Miller brought in the second run on a ground out.

The Lady Indians overwhelmed the visitors in the bi-district tournament. They put up seven runs in the first inning and five in the second to take a 12-0 lead. They then held Crooked Oak scoreless in the top of the third to get the game called by mercy rule.

Brighton O’Connor led the way for Comanche, going 2-for-2 with 3 RBI including an inside-the-park home run and a triple. Mykayla Slovak was 1-for-1 with 3 RBI. Raylee Chaney, Kinley Rendon and Caity Blair also had hits.

Kinley Rendon was the winning pitcher. She gave up two hits, struck out six and walked none.

The Ruff Nex scored a run in the top of the first, but it would be all Comanche after that as the Lady Indians scored seven runs each in the first and second innings.

Brighton O’Connor was perfect at the plate again, going 3-for-3 with 4 RBI and two runs scored. Carly Gordon and Gracee Miller each had a pair of hits; Raylee Chaney, Lily Brown, Aspen Loafman, and Madi Hare all had a hit. O’Connor and Loafman had doubles in the game and Brown added a triple.

Brown was also the winning pitcher as she saw action on the mound for the first time this season. She gave up four hits and one earned run. She also walked two and struck out two.

Comanche will be at the regional tournament in Washington along with Lindsay and Perry.

Comanche will play Perry at 2 p.m. on Thursday. A win would put them against the winner of Washington and Lindsay at 6 p.m. A loss would put them in the loser’s bracket at 4 p.m.

Friday’s elimination game will be at noon, followed by the championship game.