EYO a success in Duncan 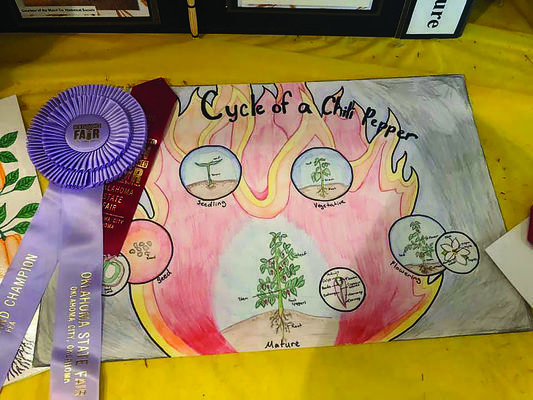 Comanche’s Alesha Zibbell won reserve grand champion for her life of a pepper plant poster at EYO in Duncan this past weekend.

With the Oklahoma State Fairgrounds closed in Oklahoma City due to the COVID-19 pandemic, the Stephens County Fair and Expo Center became the focal point of the Exposition for the Youth of Oklahoma (EYO) this past weekend.

It was estimated more than 7,000 people were at the fairgrounds this past weekend. All Duncan hotels were at or near capacity. Trucks, trailers and cars were parked for blocks.

“People had tents and campers set up and were cooking, grilling and smoking meat,” Morgan said. “I’ve never seen that many people at the fairgrounds before. I would say it is larger than the Fall Classic (pig show).”

Even with the large crowd, everything went rather smoothly.

“The people who put on the show had a plan and got everything going and were very methodical,” Morgan said. “It was good. People loved it and said they want to have it here every year. The people who ran it were very quick and thorough.”

Morgan said that would be unlikely once the state fairgrounds opens back up, but Duncan and Stephens County left a lasting impression on visitors.

“People had places where they could set up cookers and stuff here where they can’t up there,” Morgan said.

The Duncan Convention and Visitors Bureau put on a dinner Friday night, which also made a big impression.

“They were impressed with that and the crew,” Morgan said. “They had never been catered to like that before. That’s all Matt Byerly and his group. They took care of them. We may not have the newest or biggest facilities in the state, but one thing we can do is take care of them. That’s kind of Matt’s motto and we discussed that. It’s all about customer service.”

Placing in the livestock events were:

n Kate and Clara Cross both had 1st place in their open heifer classes.