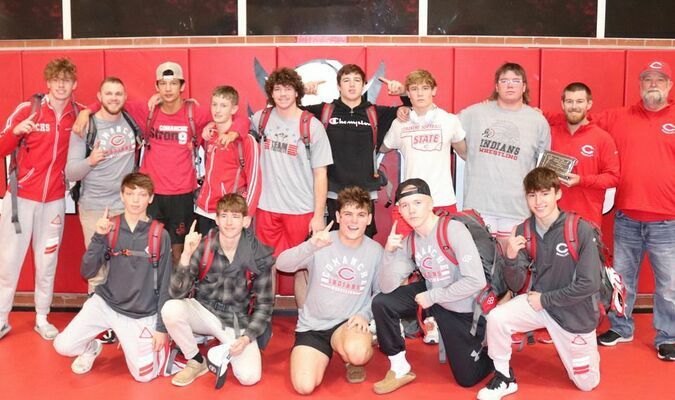 Comanche wrestling may not have won every battle, but they did win the war at the Southern Oklahoma Invitational held last Friday and Saturday at Duncan High School.

The Indians only had one wrestler in the finals and no champions, but what they did have was a lot of wins by pins. Those bonus points played a big part in Comanche securing first place in the tournament that featured 20 teams.

Comanche finished with 176 points, nine points ahead of second-place Elgin, which had beat Comanche head-to-head in the first dual meet of the year.

"With only having one finalist and no champions and then to win a tournament, it kind of says a lot about our team," said Casy Rowell, head coach. "I think we had nine placers, which was very impressive, but really what separated us from most teams was our ability to pin people. We got a lot of pins in this tournament and some really clutch pins when it really mattered."

It was a good rebound from the Mid-America tournament where Rowell admitted his team did not perform as well as he had hoped.

"We went up there against some top-quality competition and got our butts handed to us," Rowell said. "And we came back to the practice room and we had an amazing week of practice - one of the best weeks of practice I've ever had in Comanche."

"It just feels good when you put together a full week of training like that and then come in here and see improvements and that makes me excited because I think this group wants to go back next week and work even harder," Rowell said. "They realize they can push themselves and do more than they think we're capable of and so I'm excited right now."

He sees it as the perfect way to head into the Christmas break.

"We know hard work is going to pay off if we do those things like we did last week," Rowell said. "I'm excited to get back Monday and start training again."

Condict returns to Comanche to speak at FCA ban...

Consideration of bills wrapped up