Softball back in action 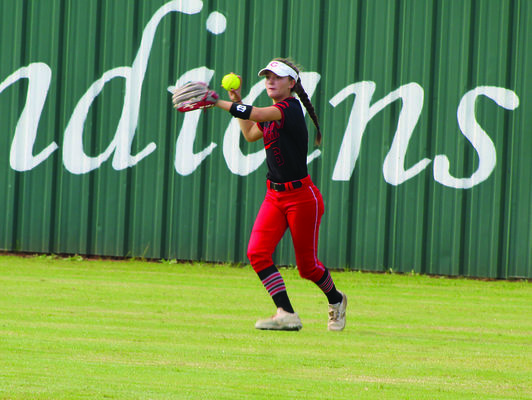 Comanche moved one step closer to securing the top spot in the district with a 2-1 win over Lindsay in a game played at Dickson.

The Lady Indians are trying to make-up games postponed due to several players being quarantined from COVID-19.

Going into Tuesday, the Lady Indians had two district games remaining, at Kingston on Tuesday and at Dickson on Thursday. Comanche (15-5 overall, 7-1 3A District 4) has a one-game lead in the district race over the two teams.

Against Lindsay on Monday, the first inning would feature all the runs that would be scored in the game.

In the top of the first, Gracee Miller doubled home Brighton O’Connor and Brooklyn Gill, but it would turn out to be enough as Comanche held on for the win.

Lindsay cut the lead to 2-1 in the bottom of the first, but the Lady Indians would shut them out the rest of the way.

Kinley Rendon was the winning pitcher, giving up one earned run on four hits. She walked one and struck out four.

After surrendering the first run of the game in the top of the first inning, Comanche responded with six runs in the bottom half of the inning to take control.

Comanche added three runs in the second and two more in the fourth.

The Lady Indians had eight hits in the game. Raylee Chaney, Brighton O’Connor and Brooklyn Gill had two hits each with Gill and Chaney each getting doubles. Gill had two RBI in the game. Caity Blair added a triple and Kinley Rendon had a hit.

Rendon pitched four innings, giving up one unearned run on three hits to get the win. She had no walks and three strikeouts. Gill closed out the game in the top of the fifth, where she gave up no hits and struck out one.

The Lady Indians pounded out 10 hits and scored the last five runs of the game to pull away for the win.

The game was tied at 2-2 after the second inning before Comanche scored twice in the bottom of the third to take the lead for good.

Raylee Chaney and Mykayla Slovak had two hits each to lead Comanche. Kinley Rendon, Brighton O’Connor, Gracee Miller, Lily Brown, Caity Blair and Aspen Loafman each had a hit. Loafman had a double and drove in two runs.

Rendon was the winning pitcher, giving up two earned runs on six hits. She walked none and struck out one.