Rivalry renewed: Comanche and Marlow to meet on gridiron 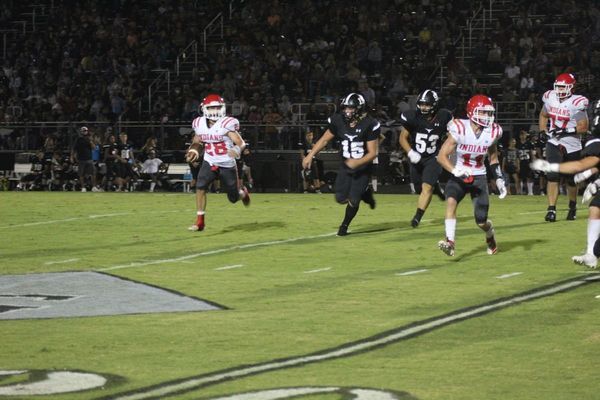 When the Comanche Indians (2-1) run out on the sidelines Friday night, they will see a familiar opponent on the other sideline even though it has been a few years since the teams met on the football field.

The Marlow Outlaws (2-0) come to town and not only will it be the first game between the two Stephens County rivals since 2017, it will be first district games for both teams in District 2A-4.

Some good news for the Indians this week is they will have everyone back after having several players out due to quarantine the past two weeks.

“The kids are excited to be back and ready to play,” said Casy Rowell, head coach. “The team is excited to have them back, too. It’s great to have everyone back even though we are not going to use that as an excuse on how things went the last two weeks (a win over Healdton and a loss at Lone Grove.”

The Indians have had three weeks of non-district games to get prepared for the district part of the schedule.

“It’s exciting to get to the district schedule, but we have to look at it as just another game toward our goal,” Rowell said.

The Indians will be looking to snap a six-game losing streak to the Outlaws.

“If we want to win a state championship some day, we have to look at it as just another game,” Rowell said. “Will it be exciting? Yes. The atmosphere will be great, but we have to remember it is one game. We still have to control our emotions and go out and execute our game plan.”

He expects Marlow to be a formidable opponent. The Outlaws have two close wins over Chickasha (24-21) and Anadarko (21-20), both in larger classifications.

“They are a well-coached team and a historic program,” Rowell said. “We have a historic program, too. We are similar in we both have kids that are good kids and are tough and hard-working kids. They are a good team. If we want to win a state championship, these are the types of teams we need to beat.”

Marlow runs an offense similar to Lone Grove where they have a back moving around and run off-balance lines.

“They are a little more run heavy than Lone Grove is,” Rowell said. “It’s old school football and there’s nothing wrong with that.”

If anything positive has coming with so many players missing out the past weeks for Comanche, it is those players that missed will be healthy. The Indians also have not lost any players to injury that have played in the past two weeks, so they should be at full strength.

Statistically, Marlow is a fourth quarter team, scoring more points in the final quarter in their first two games (24) than the first three quarters combined (21).

Comanche has been more spread out, but also has performed well in the fourth quarter with 29 points through three games. They have scored 18 in the second, 15 in the third and 14 in the first.

Marlow is lead in rushing by Julian Marriquin, who has 99 yards on 21 carries. Chase Knight leads the team in rushing touchdowns and has 61 yards on 20 carries.

Comanche has been led by Bryson Evans with 193 yards on 29 carries with five touchdowns. Gage Allie has 185 yards on 37 carries. Lake Epperson is third with 90 yards on 27 carries.

Evans also leads the Indians in receiving even though he has quarterbacked the last two games. His 10-reception, 135-yard performance against Dickson has him as the top receiver.

Gage Allie is next with 50 yards on eight receptions and Logan Bain has three catches for 41 yards.

Nate Herchock leads Marlow with nine receptions for 105 yards and Will Bergner has 97 yards on six catches with a touchdown.

Marlow quarterback Jace Gilbert is 18-of-31 passing for 234 yards with one touchdown and one interception.

Comanche is led in passing by Kooper Doucet, who has completed 18 passes for 227 yards passing with two touchdowns.