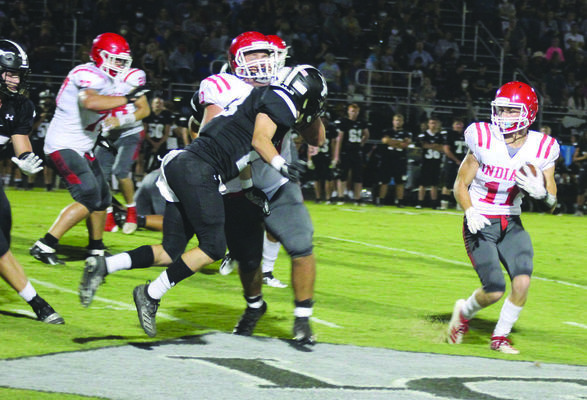 eir first loss of the season as the Lone Grove Longhorns used a big second quarter to run away with a 50-12 win in Lone Grove.

“Right off the bat, we get a big penalty that backs up near our own end zone, which puts us in a hole,” said Casy Rowell, head coach. “When you play a good team like that, you have to do the little things and we talk about stuff like that.”

Lone Grove turned the good field position into points on its first possession to take a 7-0 lead.

That would be it for scoring the rest of the quarter.

In the second quarter, the Longhorns (2-1) extended their lead to 22-0 before Comanche scored for the first time.

The Indians drove 75 yards in 12 plays. Lone Grove helped out with a personal foul call on a fourth-and-16 that gave Comanche a first and 10 from the Lone Grove 11-yard line. Two plays later, Bryson Evans took it across the goal line from 2 yards out to cut the lead to 22-6 with 4:27 to go in the half.

Comanche looked to be in good position to keep it close going into the second half, but Lone Grove would add two quick scores before the end of the half, including on the final play of the half to increase the lead to 36-6.

“Lone Grove is well-coached and they have a good team, but I think more than anything we beat ourselves,” Rowell said. “There were times when we had the ball for a while, but would get penalties and it would set us back. Lone Grove played a really good game, but we beat ourselves.”

The Longhorns put the game away with a score on the opening drive of the third quarter that pushed the lead to 43-6.

The lead would grow to as much as 50-6 before Evans scrambled for 33 yards with 2:40 left in the game to give the Indians their final score of the game.

The Indians begin district play this Friday when they host county rival Marlow (2-0) at 7:30 p.m.