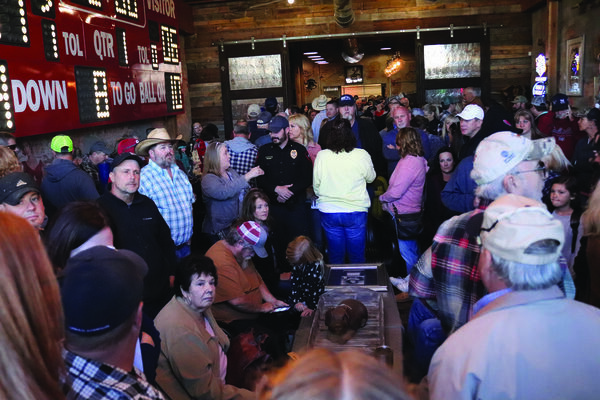 A crowd rivaling the number of attendees at the annual Christmas parade descended on downtown Comanche last Saturday morning. The difference was instead of being spread out along the street, everyone was in one building.

“I’ve been doing this 50 years and I’ve never seen anything like it,” said Gary Criswell, auctioneer. “It was incredible.”

Criswell said there were 296 registered bidders so he would estimate the total crowd to be somewhere between 500 and 600.

“Usually you bring someone with you and you only get one number, so that how we do the estimation,” Criswell said.

“I just can’t thank the City of Comanche enough for the kindness they extended to me and Mrs. (Robin) Byford,” Criswell said. “This just goes to show the legacy that Randy Byford has. He and his family contributed so much to our community.”

Criswell said final sale prices were going higher than what he expected. The highest personal property sale was a large model of a bull.

A veterinarian in Claremore had come down to see the bull before the auction to consider purchasing him as a mascot for his business. When he first saw the bull he thought the bull would go for $5,000 then the more he looked, he raised the price to $10,000 then $12,000 and then $17,000.

On auction day, though, it went even higher.

The vet ended up being the winning bidder.

Criswell said the variety of items was one of the reasons for the large crowd. Many auctions are just focused in one area, but this auction had everything from property to Kevin Durant-signed basketball shoes and everything in between.

“This is going to be an auction that Comanche is not going to forget,” Criswell said.

It gave a boost to the local economy as well. Criswell said they collected $6,227 in state and city sales tax during the auction that lasted from 10:15 a.m. to 6 p.m.

Criswell said it would take about three days to sort everything out.

Drug bust made during traffic stop in Comanche