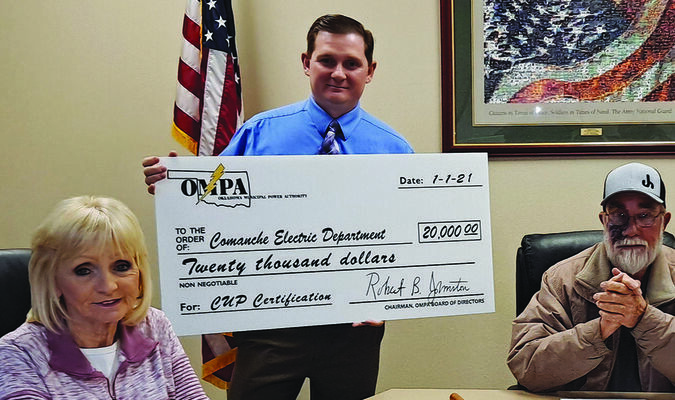 The Comanche City Council made quick work of its agenda last Tuesday night, taking about five minutes to go through the city council and public works authority agendas.

The city received a $20,000 check from the Oklahoma Municipal Power Authority for the city’s Competitive Utility Program (CUP) certification.

The CUP program is a voluntary program providing members with a way to evaluate and improve the operation of electric utilities. It is not a competitive program between cities, but a program of individual recognition.

The council also agreed to adopt new wording to its existing ordinance about no smoking in city parks. By changing the wording, it allows the city to apply for a $36,000 grant from the Oklahoma Tobacco Settlement Endowment Trust (TSET).

City manager Chuck Ralls said by changing the ordinance, the city had a good chance of getting the grant. He said the money would be used for helping provide a pavilion at the new Farmers’ Market at the old hotel on Highway 81 South and improvements for an upcoming community garden in the city.