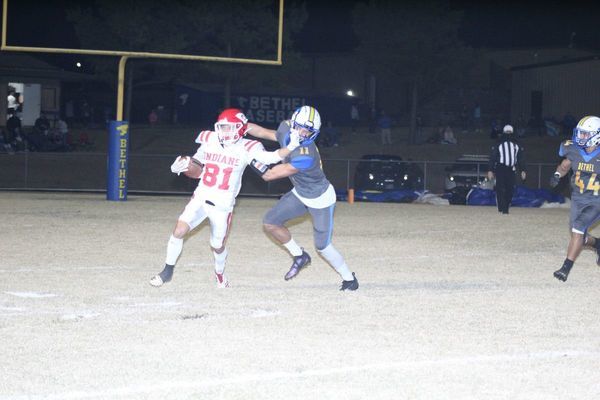 Comanche’s football season ended in the first round of the Class 2A state playoffs with a 27-0 loss to Bethel last Friday.

The teams battled to a 0-0 halftime score, but the Wildcats returned the second-half kickoff for a touchdown and took control from that point on to advance to the second round at Marlow this week.

The Indians, who were missing a few players due to quarantine, were able to move the ball over the course of the game but were unable to find the end zone.

Comanche had a chance to take the lead in the second quarter when the Indians drove from their own 1 to inside the Bethel 10-yard line, but the drive stalled at the 3 and Comanche turned the ball over on downs.

“We set the bar high and came up short this year. I can honestly say we never lost our team spirit this whole season and that is something I am very proud of,” said coach Casy Rowell on the team’s Facebook page. “There are two battles going on every game --- the mental battle and the physical battle. We did not win the physical battle last night. However, the coaches and I truly appreciate all the players that won the mental battle last night by believing we were going to win before the game started. Our time will come if we stay persistent.”

Comanche did not help itself with five turnovers in the game, compared to two for the Wildcats.

Drae Wood got the scoring started quickly in the third quarter with his 73-yard kickoff return for a touchdown. Less than three minutes later, the Bethel offense found the end zone for the first time in the game on an eight-yard run by Dez Loving.

Bethel kept the momentum going in the third quarter with its third score. This time it was Corey Metscher who scored the first of his two touchdowns on a 17-yard run. He would add a 20-yard touchdown run early in the fourth quarter to seal the game for the Wildcats. He finished the game with 102 yards on 14 carries with two scores.

Defensively for Comanche, Lake Epperson and Devon McCarty had interceptions. Epperson’s came in the first half and stopped a Bethel drive as the Wildcats were moving the ball down the field.

The Indians ended the season with a 3-7 record and it was the last game for eight seniors.

Rowell thanked the seniors and said they leave the program in much better shape than what they found it.

Comanche had 320 yards of total offense. Bryson Evans was the leading rusher with 67 yards on 15 carries. Tucker Oliver had 29 yards on nine carries.

The Indians had some success with their short passing game. Quarterback Kooper Doucet was 17-of-39 for 210 yards with four interceptions. Evans completed a halfback pass and was 1-of-1 for 34 yards.

Mason Kulbeth hauled in nine passes for 119 yards to lead Comanche. Gage Allie had three catches for 68 yards and Evans had 32 yards on four receptions.